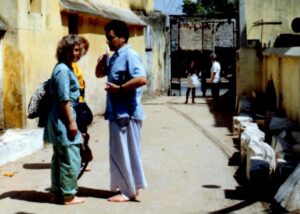 Blurry from jet lag, we followed the desk clerk’s  vague directions and searched for the temple. Sari-clad women walked through dusty streets behind cows they were taking to pastures and ox carts lumbered along loaded with wood for restaurants. The morning darkness was scented with cooking fires, cow pies, and exhaust spewing trucks.

We’d come to receive the blessing of Sri Sankaracharya, the ninety-six-year-old Indian sage in a lineage of Sankaras that began before 1000 AD. He was world-known as a Hindu scholar and a beacon of spiritual light to prime ministers and peasants. Our teacher Paul Brunton told us he was the greatest living sage. 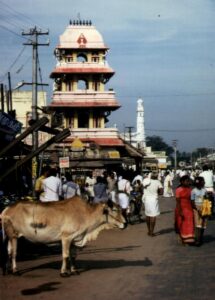 We approached the gate of a large walled pink stucco temple compound.

A thinly clad slender man nodded and pointed to our shoes. Shoes weren’t allowed inside out of respect, so I gave him my boots with wool socks stuffed inside. He put his hands together and bowed before placing Vic’s and my boots and Michael and Harriet’s sneakers on a shelf next to flip-flops and sandals. The air felt delicious on my sweating feet.

He waved us down a dark sandy alley, dimly lit by a few oil lamps. A barefoot man in a military shirt and hat stepped out of the shadows. 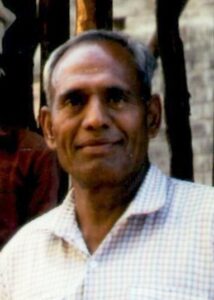 “What is your name, please?” he asked.

“We are students of Anthony Damiani and Paul Brunton from America and have written permission to visit,” we answered. He smiled.

“I am Powar,” he said in British-accented English. We’d heard good things about Powar from friends who had visited Sankara. “Please welcome to India.” He gave us a toothy grin and a Tamil nod. I knew I could trust him.

Powar led us down steps to a narrow concrete pad near a dusty floor to ceiling curtain. He handed us thin cushions and motioned that we should put the cushions on the concrete and sit down. The sun hadn’t risen, but it was already hot. 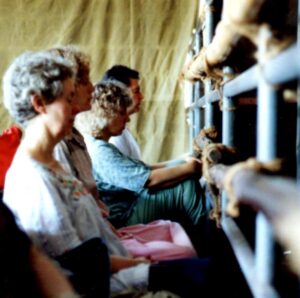 As dawn came, sari-clad women sang prayers and blessings in ancient Sanskrit. They lit smoking oil lamps and waved the smoke to the four directions with their hands. I tried not to choke. I sat without moving but my mind raced as we waited for whatever would happen next. A young shirtless man in a white wrap with Brahman beads across his chest pulled the heavy curtain open. 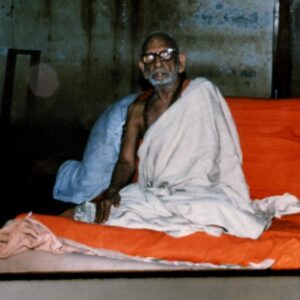 There he was, just ten feet in front of us. Sri Sankara, the one we’d come to see. A wisp of an ancient being, wrapped in a faded cotton saffron robe, sitting on a mat on the concrete floor. A few young men in white hovered around him.

The ancient sage lit an oil lamp and waved the smoke in the air as a blessing. He poured water from one bowl to another. He whispered prayers and draped a string of white jasmine flowers on his head. Everything was a blessing. I had stepped over a magic threshold and entered another realm.

Have you gone on journeys not knowing quite what you were after? A spiritual initiation, a cultural opening, a longing that needed a response? On our third trip, I learned an unforgettable lesson which I’ll write about soon.

If you haven’t read the first two parts of this series, see Out of Control: Pilgrimage to India 1. For the second part of the story, see Out of Control, Part 2 (Journey to India). We bought clothing to wear until our luggage came, but it was impossible to find ready-made clothing that fit the men, so they wore Indian-styled men’s wraps or dhotis. Vic loved his dhoti, especially for meditation, and camera and dhoti became part of every India trip.