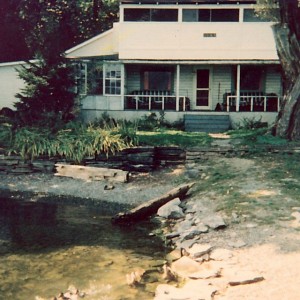 “$110 a month, including heat and electric,” she said. That was one third of Vic’s graduate student stipend.

I glanced over at Vic. He gazed longingly at the dock. He eyed the front yard, a narrow strip of grass that dipped down to a shale beach and Cayuga Lake. He craned his neck to see the top branches of the massive willow trees.

We would have to hike the steep driveway from the road when it snowed, but we didn’t care. We hated our cluster fly infested second story apartment in Interlaken. We froze last winter while we experimented with brown rice and hatha yoga. The only warm place was under the covers. Our wedding date was one month away and the Interlaken place would put a bitter curse on our marriage. Cold = tight shoulders = anxiety = arguments.

The drive from Interlaken to Ithaca where Vic went to school and I worked was half an hour in the best conditions, but much longer when Vic’s black VW wouldn’t start. On many a frigid morning, I sat in the driver’s seat and steered while Vic pushed the car down the slight incline of Route 96A. When the bug began rolling, I slammed in the clutch and gave it gas. It usually started, but sometimes it took a few tries and prolonged cursing. 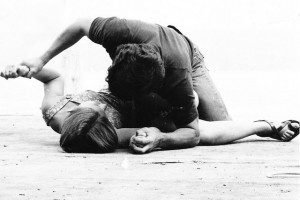 Playing on the dock at Cayuga Lake: photo by Rufus Diamant

We needed a home and Vic had that determined look he got when he wanted something. His clarity reassured me.

“Look at this place, E. It must have been spectacular in its day.”

“It was the third cottage built on the lake,” Mrs. Schooley said, “but I can’t keep up with it since my husband died.” Her sad eyes and tight mouth sent a stab of pity through my heart, but I quickly returned to planning my own charmed future.

“The roof needs new shingles,” Vic said as he inspected the outside of the house.

“Yes, yes, it does. I haven’t gotten around to that,” Mrs. Schooley apologized.

“May I work off some of the rent by putting on a roof?” Vic asked. I knew he could fix motorcycles and toasters, but I didn’t know he could put on a roof.

“Don’t worry. We can afford it,” Vic said as he squeezed my hand.

Do you have stories to tell about your first home? You might enjoy another story about living on Cayuga Lake, The Crone of Cayuga Lake, or other stories about my land and home: Coming Home and My Mysterious Home.