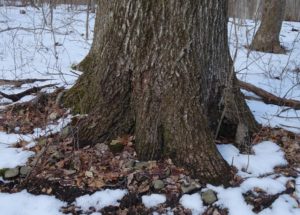 I’ve always felt grounded, sturdy in my hiking boots on a challenging trail, but there is no “always” in bodies. We change constantly, quickly or slowly. In 2013, as my L ear roared and the hearing disappeared, I listed left and fell against my friend Janet Wylde while we walked. I struggled up and fell again, relaxing into the fall because there was no choice.

Nothing hurt and my mind was clear, but my balance was gone. I’d had a Meniere’s Disease hearing loss pattern for over twenty years, so ENT doctors often asked if I had “drop attacks.” 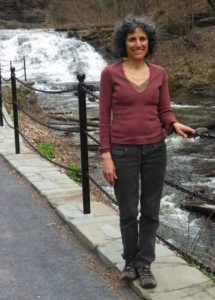 As I sat for two hours on cement steps in downtown Ithaca, I considered my situation. So this was a drop attack. Now what? I asked Janet to test me for stroke. My speech wasn’t slurred, my upraised arms and mouth were even, my vision and mind were fine. No, not a stroke.

Janet, ever generous, drove me home. By the time we got there, I could walk from the car to my house, dazed and disembodied, but standing. A neurologist diagnosed Meniere’s vertigo, and eventually I found medicines that helped. 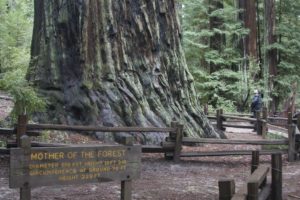 I considered attending a dream workshop led by Robert Bosnak, a Jungian analyst who does Embodied Dreamwork and gives a yearly workshop nearby. My hearing had prevented me from going for years, but the acoustical environment would be good and people speak slowly, one at a time, when working with dreams. I signed up.

Just before the workshop, I dreamed:

I sit in the back row of a tiered auditorium surrounded by rowdy, loud, laughing students, chaotic noise that shatters my calm and brings on vertigo. Wanting to hear, I move to the front of the auditorium, walking down wide steps to hear the dark woman who will speak. She has no neck or head. She asks me, “Do you know what happens after death?” I say, “I don’t know but I have a strong belief system.” 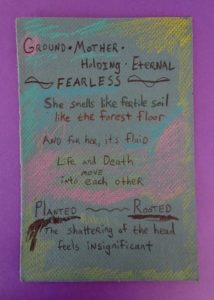 To escape the shattering noise, Dream Elaine descends the stairs like a supplicant journeying to the Underworld. As I move down, lower and lower.

Who is she? How can she speak without a head? In the dream, her headless body isn’t horrifying or upsetting. She’s thick and stable. Heavy and grounded. Her voice, low and deep, comes from the depths of Earth, far below the noisy chaos above.

She knows what happens after death and her knowing is so much more than my headtrip beliefs. She witnesses the eternal flow as life and death cycle into each other. As I describe Her, words bubble up from within without a story. A friend writes my words down and hands me this card the next morning.

Ground…. Mother…. Holding…. Eternal…. Fearless…. Fertile… Smell of a forest floor…. Life and Death move into each other…. Planted…. Rooted…. 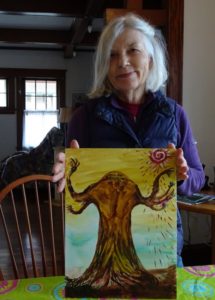 The following week, friends and I paint together. I want to paint Her, but I only have a vague image from the dream. I begin with thick legs in dark earth colors and let Her emerge. Her headless body becomes a tree trunk. She has one red fruit, like Persephone’s pomegranate. One spiral of flowing energy.

She is Earth Mother, the Ground beneath life’s chaotic flow. She’s the One I need to hear.

I had explored this dream with Robert Bosnak and talked about it with my dream therapist before painting, but I didn’t know she was a tree until I chose colors and the trunk emerged. Do you paint your dreams or memories? I easily become too wordy as a writer and painting takes my understanding to a deeper level.

For another piece about my challenges with Meniere’s Disease, see Dizzy, Deaf, and Determined.  For another article about exploring dreams with painting. see 9 Ways to Unpack a Powerful Dream.