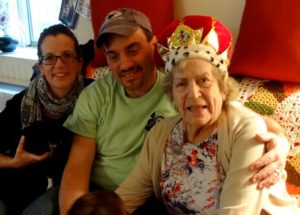 The funeral home owner called me after my mother-in-law’s death on Thursday. I’d prearranged for him to pick up her body and deliver it to the crematorium since this was her wish, but I had to identify her body because the funeral director didn’t know her.

“I’ll pick her up tonight,” he said, “but you won’t be able to get to my place from Friday through Sunday. It’s Grand Prix weekend.”

Ah, one last delay in her 102+ years. At the Watkins Glen Grand Prix, vintage cars are displayed and raced on downtown streets, the original Grand Prix track. 30,000 people inundate a village of a few thousand. Traffic stops.

“We have an up-to-date facility,” he said. I knew that was code for good coolers or dry ice since we had agreed on no embalming or make-up. 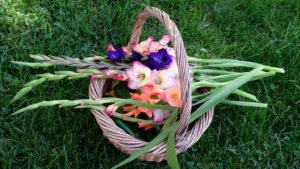 Waiting gave me time to prepare for a pre-cremation ritual. On Friday, I bought a burnable wooden cross (hers were metal) and a soft white blanket to shroud her in the cremation box. Sunday, I cut flowers from my garden. On Monday, my son Anthony picked me up for a somber drive to the funeral home, but there was already gentle humor.

“She’ll think the Grand Prix is a celebration for her,” I had said Friday evening. 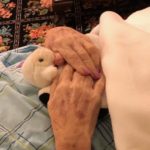 “Yes, and she gets to step through the Pearly Gates holding hands with Burt Reynolds,” David said. “Grandma loved Burt Reynolds.” He died the same day she did. Our jokes felt just right.

Her body lay in a wooden container on top of a blanket. Her hands held a soft toy bunny sent with her from the nursing home—a sweet touch of kindness. 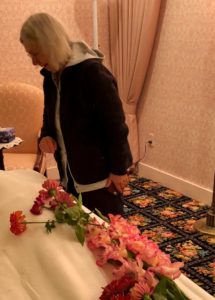 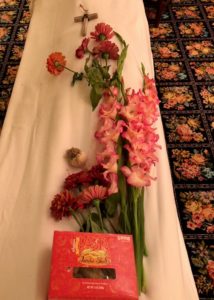 With Anthony at her feet, we shrouded her with the white blanket. I laid gladiolas and zinnas over her body—bright flowers she loved. In keeping with family tradition, I added her favorite foods, garlic and pasta. No red wine included since glass wasn’t allowed.

“Thank you for your gentle death,” I said to Virginia’s lifeless body. “Thank you for being a challenging teacher for 50 years. I’m sorry for the times I responded to your anger with anger or cold disdain. Thank you for taking care of Vic after you and he were abandoned. Thank you for loving him and keeping him safe. Thank you for the love you gave your grandsons. All is forgiven. May there be Peace.” Before leaving, I said “Hail Mary” a last time. 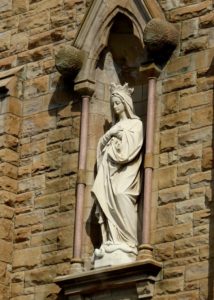 Anthony and I drove home along the road overlooking Seneca Lake. “I want to see Hector Falls,” he said. He spotted a large bird perched on the railing close to the road, 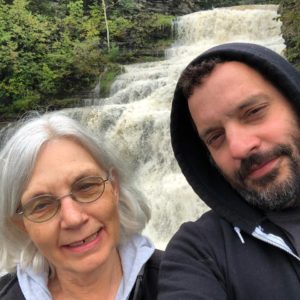 “Let’s go back,” I said. We stopped at the wild waterfall and headed back south. The bird remained on its perch while cars whizzed by. Was it injured? Was it a young eagle or a huge hawk? Why was it still there?

Anthony parked on the narrow roadside and walked toward the bird. It flapped its wings, but stayed. Anthony got close, but decided he didn’t want to scare it into the road. We called for animal assistance, but later learned it had flown before they got there.

A friend at the Farm Sanctuary identified it as a large red-tailed hawk with wet feathers fluffed to dry. My husband Vic’s totem had been a red-tailed hawk—and Virginia was his mother. 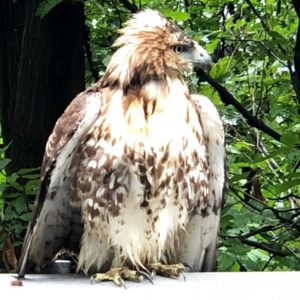 “That’s your totem now,” I said to Anthony. He’d noticed the hawk first. He’d gotten close and snapped the photo. Later that day, Anthony signed a contract for a new job which marked a big turn in his life. The hawk felt related to his life transition and grandmother’s death.

So much didn’t need to be said. There was no resentment or anger left to express. Only fatigue. We didn’t rehash old wounds or resentments. We’d worked it all through. Like the rushing waterfall, all had been cleansed and washed away in the flow of time.

Thank you, Virginia, for being a powerful and persistent teacher for most of my life. Thank you for softening toward me in your last years. Thank you for teaching me lessons I’m only beginning to understand. Peace be with you.

Do you create personal rituals for those who’ve died? Do you have a set way of doing this within a religious tradition? We have a personal style, but the next day I went to Immaculate Conception Church and arranged to have masses said for Virginia. It’s one of the few things she requested. Her second request, to have her ashes buried near her son, will come later when the family gathers together. For a post about saying goodbye to Virginia the day before her death, see When Death is a Gentle Gift. For a post about creating healing ritual many years after a death, see Six Ways to Invite Love to a Death Anniversary.