My Wedding Ring, My Lucky Charm 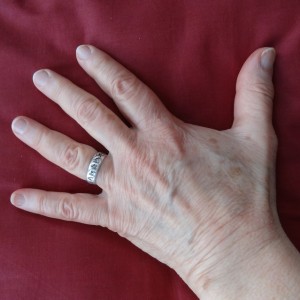 I took my wedding ring off on the first anniversary of my husband Vic’s death. The next morning, I put it back on. Vic dead. Me alive. Definitely still married.

I removed the ring a few months later and gave it a place of honor on my altar. Ok, I accept that I’m a widow. I hated the finality of the widow word and his body’s absence, but it was time to leave the ring behind.

And I did for a few days, until I felt naked without the reminder of Vic’s love and put it on again. At some point, I stopped wearing my wedding ring and left it on my altar within a grief bracelet that Lauren made for me. Giving up the ring for good was like having a last period. I wasn’t sure it was the last until long after it was over. 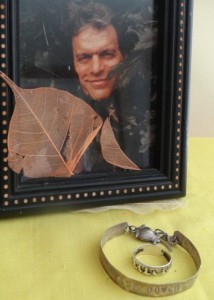 I often slipped the ring on my finger for just a moment, kissed it, and twirled it with my thumb. I remembered 1968 when we stopped at a rest area in eastern Nebraska on our way to San Francisco. The ring and marriage were new and the silver relief rough, so I put the ring on the blanket we had spread on the grass for yoga. When we made camp in western Nebraska that night, I sobbed when I realized the ring was gone. Vic packed the car and off we drove to eastern Nebraska where at dawn after a futile flashlight search through the grass at the rest area, we found the ring riding under the back door of the station wagon. It had been with us all the way.

We didn’t care that we’d lost a night’s sleep and a day’s drive. We had the ring and each other.

We bought the silver ring in a hippie import shop for $8. It says in one translation, “He is my beloved and I am his.” The characters on the ring are Hebrew, from the Song of Solomon, although I was a lapsed Presbyterian and Vic a lapsed Catholic.

For the last three years, the ring stayed on my altar. I admired it, but didn’t need its reassurance. Then in late October, my hearing went beserk with clanging and banging, drumming and humming. I was diagnosed with Meniere’s Disease, a disorder of the inner ear.

“You’re lucky,” the otolaryngologist said. “No dizziness, no nausea, no swirling, just tinnitus and hearing loss. Must be your good diet saving you from the worst.”

I tried to feel lucky as the droning hums increased my isolation and made communication exhausting and imprecise. I depended on lip reading, so phone calls became impossible. I tried to envision a life of solitude as I waited for new hearing aids and more technological support. I refused to let this stop me.

A month ago, dizziness struck. A stumble against a friend progressed to sitting on the sidewalk, unable to walk, unable to stand. Friends and family held my hand and worried over me. Waves of imbalance and vertigo lasting an hour or more came without pattern and with increasing frequency. In case I had any doubt, I now knew I was not in control.

I longed for the protection I had felt in marriage. I needed to feel loved as Vic loved me, as we loved each other, so I slipped my wedding ring on my left ring finger one morning and left it there, twirling, kissing, and feeling safe.

Recently, I found a medicine that keeps lightheadedness from progressing to butt-on-the-floor desperation and my new hearing aid technology helps with telephones and all communication. Feeling stronger, I took my wedding ring off my hand and hung it from a chain around my neck. And there it sits over my heart as I find new balance–my amulet, my lucky charm, my medicine bundle, my symbol of undying protective love.

What does your wedding ring mean to you? For other blogs about my early marriage, see My Hippie Wedding or The Art of Argument. For more about hearing loss, see Whispers and Roars.