Brothers, Sons, and a Missing Dad 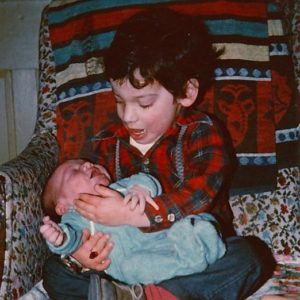 In 1974, David greeted his newborn brother with joy and a dripping nose. I decided their first meeting was more important than the risk of a snot-filled infant. My husband Vic took photos as I put little Anthony in David’s arms. I wanted them to love each other even if the price was a baby with a nasty cold.

When Vic came home from work in 1975, four-year-old David waited by the front door.

“Oh, how my feet hurt,” Vic moaned. “Do you see anything wrong with my feet?”

“Oh, Daddy,” David exclaimed, his eyes bright with discovery. “You put your shoes on the wrong feet.”

“That’s silly. I wouldn’t do that,” Vic said looking down at his feet. Then he threw his hands up in mock alarm. “You’re right, David. That’s why they hurt. My shoes are backwards.”

Vic reached over to tickle David who let loose with the clear loud laugh of innocence.

“They’re the fruit of the love tree,” Vic said as he picked up one-year-old Anthony. The baby had no idea what was going on, but laughed at the joke anyway.

I told the shoe story in my book Leaning into Love. It came up this weekend when David visited from North Carolina. David and Anthony laughed, wept, and retold many family stories during David’s short visit.  Eleven years after Vic’s death, we’re not “over it.” Grief came to stay. 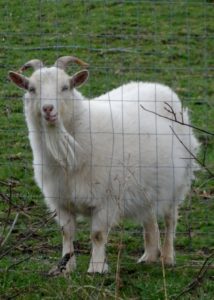 “Is this road safe?” I asked. David picked up on my anxiety.

“Daddy, are we lost?” David asked.

“I’m the biggest Billy Goat Gruff,” Vic said. “I won’t let that Troll get us. We’ll be fine and get over the bridge.”

“You lost the fun parent when your dad died,” I said last weekend. No one disagreed. I wouldn’t have dreamed up a trip to the winter forest to cut a load of firewood with a thermos of hot chocolate in the wagon for two little boys.

Vic often had treats in his briefcase. A Half Moon cookie or a Richard Scarry book or a metal matchbox car from a shop in town. Would Daddy’s briefcase hold a treat today? It was their guessing game. 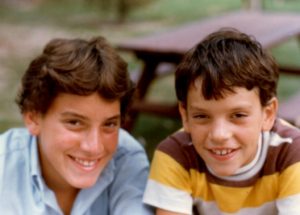 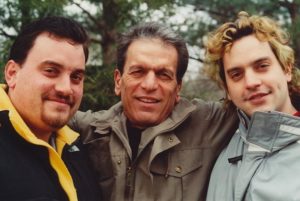 When they were older, a late winter snow meant school was canceled again.  I wouldn’t have entertained two crazy-bored boys on a cold winter’s evening by enticing them to run outside naked and circle the house in the snow. Yes, Vic did. Yes, I protested. Yes, the little boys stripped down and took a loop, hooting and laughing all the way.

The roundtrip lasted less than a minute. (I’m trying to reassure you we weren’t irresponsible parents, but it’s a hard sell.) There were towels warmed near the wood stove. I didn’t approve, but they were having so much fun while I fretted. I hoped Child Protection wouldn’t visit. David and Anthony still laugh about that night. 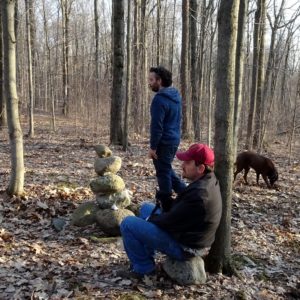 As the kids grew up, Vic involved them with various building projects from cold frames to dog houses. Last weekend, I watched my two sons build a hoop house for spring planting at Anthony’s cabin. We couldn’t help longing for our missing fourth. 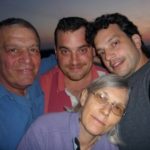 Do you have siblings or children who are siblings? Do you celebrate life and grieve together? For other posts about our family, see Remembering Where We Belong. My brother and I had years when we rarely saw each other, but we showed up to support each other later in life. I wrote a piece about his last days called Coming to Carry Him Home. It isn’t always smooth sailing in my family, but I’m grateful when my adult sons show up for each other (and for me). I liked this article about How to Maintain Sibling Relationships.