Ease Suffering for Everyone, Including Ourselves 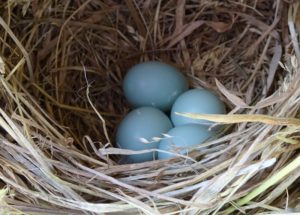 My phone buzzes. The screen reads “restricted number.” Probably an advertiser, but it could be my mother-in-law’s Hospicare nurse, so I pick up.

“Hi Elaine, it’s Ray.” Ah, the Hospicare nurse. “Virginia has an infection on her leg and skin break-down. It’s inflamed and angry. I’d like to order an antibiotic. What do you think?”

I think I’m inflamed and angry. I’m tired. I’m burned out. I’m choked by the rope that tethers me to my 102-year-old mother-in-law who has repeated crises and recovers from every assault to go another round. Ray knows. Our Hospicare social worker knows. They don’t need to hear my lament again.

“Do what will reduce her suffering,” I say. That position leads to my best, most generous self. 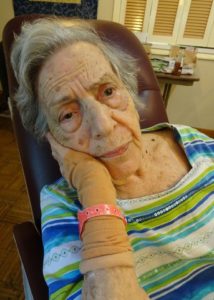 “She didn’t know me this week,” I say. “It’s the first time she hasn’t known me. She kept asking who I was married to.”

“But her body is holding steady again after that major fall?”

“Yes,” Ray says. “I didn’t think she could recover from that, but she did.” 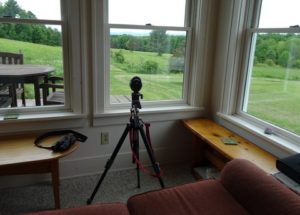 During this call, I sit on my couch and watch bluebirds through the telescope. The female comes and goes from the nesting box. Her mate hops from the roof to the perch above the box to scan and watch for intruders. Fortunately, I’m not seen as an intruder.

This is how I relieve my suffering during another distressing conversation about Virginia. As I watch the birds go about their lives, my heartbeat slows and my breath deepens.

The bluebirds nested in the box closest to my house again. Usually the female moves to a new location after her first clutch, but this year she chose to stay here for her second family. 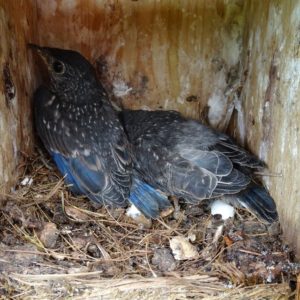 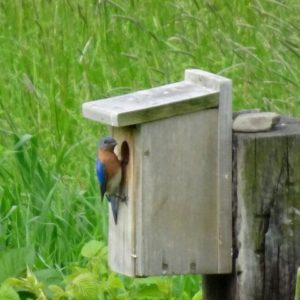 Last week, I thought the first brood of five had all fledged. I opened the box door to find two cowering in the back. “No, no, don’t make me leave.” I latched the door, ran inside to my telescope, and focused on the door of their house. Papa Bluebird flew to the box door and stayed a minute or two. I imagined him coaching or enticing or reassuring. When he flew away, they followed. Yes! 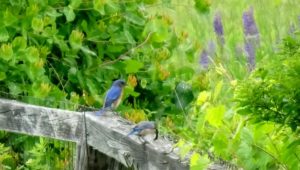 I hustled outside, cleaned the old nest out of the box, and left the door open to air. Then I saw the couple on the railing where she tenderized a caterpillar by banging it on wood while he watched. When they left, I closed and latched the nesting box door and waited.

The next day, she carried mouthfuls of grass into the box. He stood on the roof with a few stems in his mouth. Carrying grass is a male bluebird come-on even though he doesn’t offer the grass to her or help build the nest. She builds. He guards her and the territory. 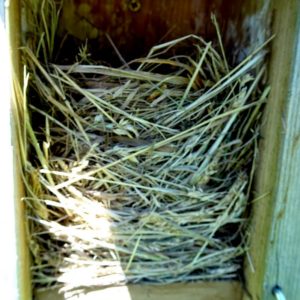 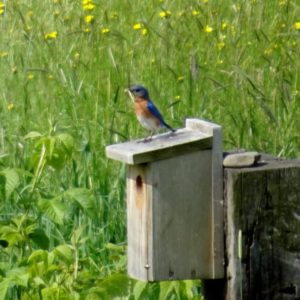 This morning, as I listen to the Hospicare nurse ask me what to do for my mother-in-law and take in the depth of my empathy-fatigue, I know what to do to ease my exhaustion. Watch bluebirds. As they build and nest, my heart fills with the sweetness of the life, despite the suffering, despite the unrelenting deluge of tragic news. 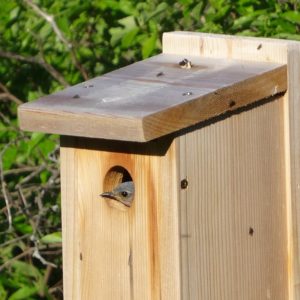 Ease suffering. For my mother-in-law, for me, and for everyone.

Thank you, Hospicare. Thank you, Ray. Thank you, bluebirds, for staying close this year to let me watch you raise your second family. I need you.

How do you ease your suffering when life demands more than you can give? Does Nature’s beauty help? For other articles about caregiving, see To Forget and To Remember. This post reminds me of the many big changes we’ve gone through in the last 2 1/2 years. For more about the healing power of nature, see Mothering Monarchs, Mothering My Soul. (I changed the Hospicare nurse’s name for this story.)