Life Is Sweeter When We Keep Old Friendships Strong 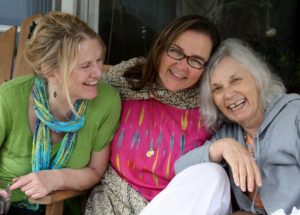 June 2018 was “Friends Matter Month” in my quiet world. Usually, I crave silence and ample sleep and avoid large servings of chocolate cake and beer. I tossed the rules overboard in a friendship love fest.

Richard and Julianna arrived for lunch and a walk on June 10. They’d flown to Ithaca from Colorado to celebrate the 50th anniversary of their marriage. In 1968, at age 22, I was Julianna’s matron of honor. My husband and I were married at their home earlier that year. 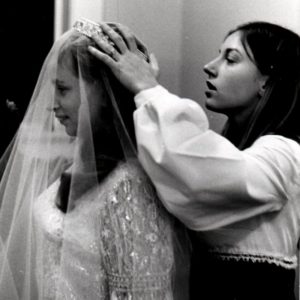 with Julianna Platek at her wedding, 1968

In 1966 on a visit to California, a friend heard I was returning to Ithaca. “You have to call my buddy Richard. He started teaching at Cornell this year. You’ll love him and his girlfriend.”

“Come over now,” Richard said when we called. After a long drive on dark country roads, Richard and his girlfriend Julianna opened the farmhouse door with light-filled smiles. We took one look at each other and grinned in recognition. Four politico hippies. Guys with beards and sandals, girls with giant earrings and no bras. Our instant attraction ripened into deep love.

At their celebration, I feared Vic’s absence would break my heart, but old friends were there to give me hugs. They knew I hurt. They also knew I was grateful for Richard and Julianna as they renewed their vows. We howled with laughter when they ended their solemn ceremony by exchanging Fitbits. 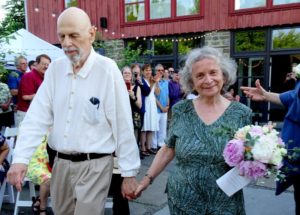 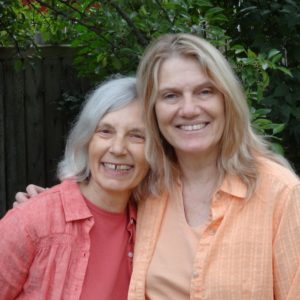 Pat arrived from California that week and stayed with me five days. I met Pat in 1970 in a class at the American Brahman Bookstore. Long golden hair, an angelic smile, and a beautiful round belly carrying her first daughter. She and her husband bought land near ours. My sons called Pat their second Mama, and I witnessed the birth of Pat’s second daughter.

Pat and I had some rocky times, too. Friendship like marriage hits rough patches. Years ago, Vic and I visited Pat and her family in California. We began healing the wounds with long talks, apologies, and ample doses of forgiveness. Facing the ways I’d let Pat down made me love her more and become a better friend. 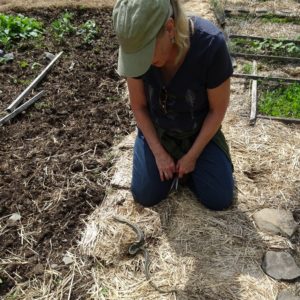 Pat in my garden with a grateful snake

While Pat was here, we walked, watched bluebirds, joked, cooked, and grieved the loss of our marriages—mine through death, hers through divorce. One morning, we found a female garter snake trapped and seemingly lifeless in netting in my vegetable garden. Pat carefully cut away the net and released the snake. Watching the snake taste freedom with a flickering tongue felt like a healing renewal.

My son Anthony took us for a Seneca Lake beer tour. I soaked in their love for each other. Despite 3000 miles between us, our heart connection stands strong and tended. Pat’s still both my sons’ second Mama. 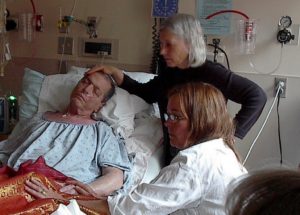 Lauren arrived from California next. After a Saturday reunion of friends who had studied philosophy and meditated together beginning in 1967, after the 50th anniversary party the next day, I was burned out. But love called. Lauren was here with laughter, generous hugs, and deep appreciation for the beauty of this land and our shared memories. We spent a week of catching up with a relationship that, despite distance, sustains and strengthens over time. 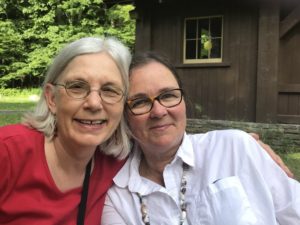 I was with Lauren for the birth of her second daughter and watched a curly-haired head emerge from her mama’s body. Lauren was with Vic and me through Vic’s illness and last days. When it was clear Vic was dying, Lauren said, “I’m here until the end.” My spiritual companion of loving heart. Along with our dear friend Steve who also stayed and old friends who came and went, we chanted, oiled Vic’s feet, and prayed. We held Vic. We held each other. 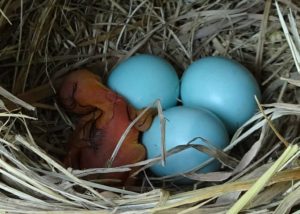 Before Lauren left, we walked to Vic’s cairn. On the way, we opened the bluebird box. Inside we found four blue eggs in a nest the female had built the week before. New possibilities had arrived in the on-going cycle of birth, love, and death. The wheel of life kept spinning while we held each other close.

These and other friends live far away, so it isn’t easy to keep our relationships strong. Do you travel to strengthen bonds and sustain lifetime friendships? For a post about visiting Lauren in California, see In the Company of Friends. For a story about my relationship with Pat, see Healing Old Wounds Made Us Friends for Life. Julianna and Richard moved to Colorado recently. I haven’t visited, but it’s on my agenda.