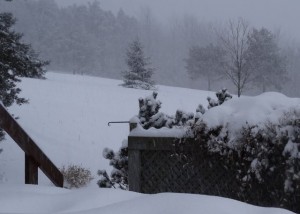 Peter’s red pick-up is parked in the road when I get home just before dark. Peter often brings his dog Simo to my land for a run, but Peter’s long dark silhouette stands alone against the snow.

“Come inside and get warm by the wood stove,” I offer, guessing what has happened.

“Simo took off,” Peter says with resigned eyes and a thin smile. Simo has taken off before, but he always comes back in an hour. Peter works hard to train this sweet rescue dog, but he’s a young hound with a wild need to run.

I offer Peter almonds and we talk about the difficulty of training an adult dog to stay with us in the woods, especially a hound on a deer trail.

“I’ll keep calling him and let him inside when he comes,” I offer. “You can pick him up in the morning.” At 8 and 9 and 10 p.m., I stand on the back porch while the snow flies and whistle until my hearing aids shrieks. Then I call with long drawn-out vowels. “Si-mo. Si-mo.” No Simo at midnight or 4 a.m. or 7 a.m.  By morning, new snow covers any tracks we might have followed. My heart aches for Peter and everyone who loses what they love.

Three days later, there is no sign of Simo. The weather is bitter and the snow pack deep. Yesterday, I tromped through my woods on snowshoes whistling and calling, “Si-mo.” Peter searched the woods and the road many times and called the Schuyler Humane Society and the sheriff. Peter’s phone number is on Simo’s collar, so we hope the hound is cuddling next to a wood stove somewhere and will find his way home. I watch for him out the windows, hoping for a miracle. 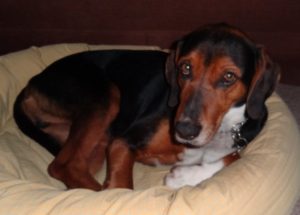 This year, I hope to do better at accepting unavoidable losses, to make another baby step toward opening to whatever comes. I’ll try to follow Pema Chodron’s advice and be curious about what arrives. I’ll breathe more deeply and relax rather than resist.

When I whine about my losses, you can say, “That was a dumb New Years Resolution.” Then I’ll quote the first stanza of Naomi Shihab Nye’s poem “Kindness,” one of the wisest and most hopeful poems I know about loss.

For Peter, the lessons are harsh, but I trust the words of the poem. When we lose things, we soften to others who have lost what they count on. I trust Peter’s heart is being opened to kindness. I wish it didn’t hurt so much.

Before you know what kindness really is
you must lose things,
feel the future dissolve in a moment
like salt in a weakened broth.
What you held in your hand,
what you counted and carefully saved,
all this must go so you know
how desolate the landscape can be
between the regions of kindness…

I wish you a happy and peaceful New Year. May your losses become opportunities. This post experience with Peter and Simo happened in 2013. After five days, Simo stuck his head out of the dog house on my back porch when I walked outside to call once again. He somehow survived and found his way back. I fed him and called Peter.  Simo is an old dog now, still living with Peter. Follow this link to read the complete poem “Kindness.” Mothering Our Abandoned Longing is about the vital role played by my dog companion and therapist Amigo after my father’s death.