An Owl, a Dream, and a Mystery 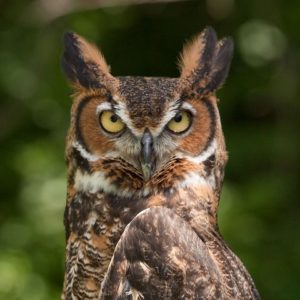 A few nights after arriving in Arizona to visit Dotty and her family, I had a dream: I walk up a steep hill with Dotty. I’m looking for a safe place to release a large owl. Dotty opens battered wooden barn doors and enters the dark. “What’s it like in there,” I call through the opening. “Dangerous,” she says with a grin. “Dangerous for humans,” I think. “A good place for an owl.”

Four days later, we walked along the San Pedro River on Nature Conservancy land. The San Pedro is a fertile green ribbon of cottonwood trees and native plants in a dry desert valley. It’s the last above ground river between West Texas and California. 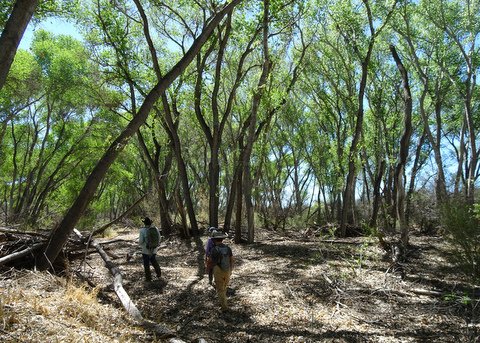 Descending into the river basin from the dusty desert, we entered a shaded wet world. Although the river rages in monsoon season, it was placid that day. We walked along a newly cleared trail while our guide pointed out native plants and animal signs.

Suddenly, he stopped with his right hand held out with a flat downward palm, the signal I use to tell my dog, “Wait!” Then he pointed into the trees. 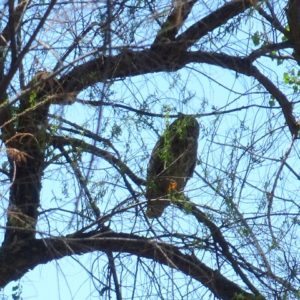 “There’s a Great Horned Owl in the branches,” he whispered. The owl’s large motionless body first looked like part of the tree. When my eyes found her, I was jolted by her queenly majesty. Her watching yellow eyes pierced my bones.

The naturalist motioned us into a clearing for a better view. The owl gazed at us for five minutes before she unfolded her five-foot wings and flew north. Silently.

Two owl sightings in less than a week–one inner and one outer. A synchronicity? “So two things happen and they feel connected,” I imagined my husband Vic saying. “But what does it mean? Without meaning, it’s a coincidence, not synchronicity.” Vic’s first book was about synchronicity. 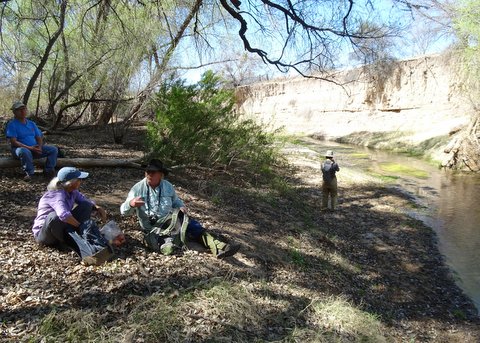 Picnic by San Pedro River with Fred, Dotty, our guide, and Josh

Unlike the small Athene noctua or Little Owl associated with the Goddess Athena, the river owl was massive. Large feathered ear tufts were a giveaway. A Great Horned Owl.

Twenty years ago, my son found a dead Great Horned Owl on our land in the Finger Lakes. It didn’t look sick or injured. Just dead. A friend and I inspected the fierce talons and beak before harvesting feathers and burying the owl. I never forgot our burial ritual. 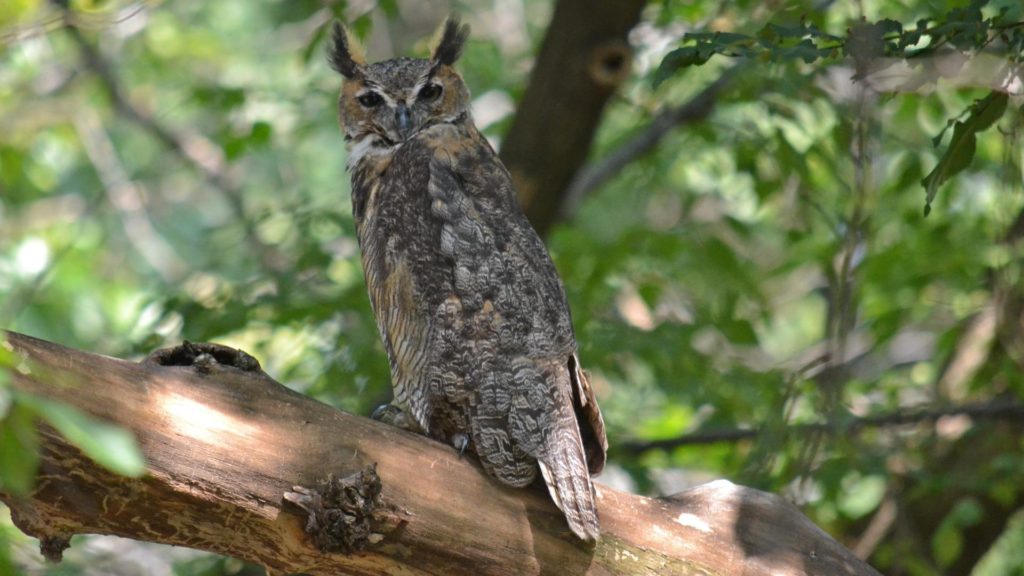 In 2014, I drove home late at night through a flash flood. There was a blackout. I couldn’t see any markings on unfamiliar dirt country roads. The main roads were flooded and blocked, so there was nothing to do but keep going. I inched forward, trembling. It took me two and a half hours to make what’s usually a half hour drive.

When I reached familiar roads near home, the rain slowed. A Great Horned Owl with drenched feathers stood in the middle of the road. It rotated its head 90 degrees and peered through my windshield. I lowered my lights and we watched each other for ten minutes before it opened its huge wings and flew. I felt the owl protecting me, checking to make sure I made it home. 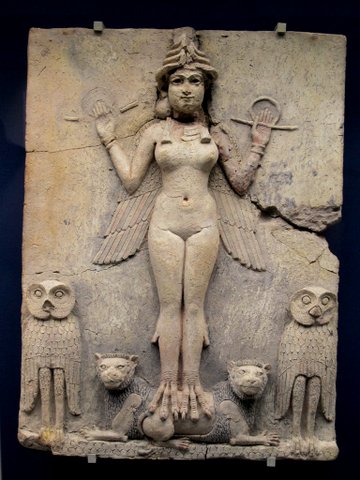 I remembered the Sumerian Goddess Inanna was called “Divine Lady Owl.” I’ve studied Inanna’s stories and written about her for years.

In the Burney Relief (~1800 BCE, Southern Mesopotamia), Inanna’s owls are large, like my dream owl and the Great Horned Owl. I see them as protectors with night vision, guiding the Goddess’s descent to the Underworld to be initiated into the wisdom of death and the unconscious. In this image, Inanna has owl’s wings. Her lethal talons clutch the backs of lions. Inanna is an Owl Goddess of the Dark Mysteries.

In southwestern Native American tribes, owls and their haunting night hoots foretell a death. Is something dying in me? Death could be actual or symbolic—the death of an old way of being, a harbinger of change, a coming transformation, as well as physical death.

“What’s the meaning?” I ask myself as I read about Great Horned Owls and search for images. I note their acute night vision and hunting skills. I’m especially interested in their keen listening in contrast to my damaged hearing. 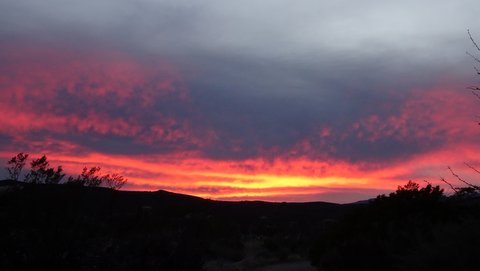 Arizona sunset after our walk

Maybe I’m developing a new kind of hearing, an inner listening for the Great Unknown. My dream and a daylight (conscious) sighting of an owl comfort me. Even though I often feel lost, I must be moving in the right direction. 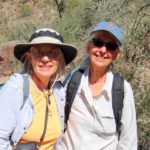 Have you felt deep inner connections between inner and outer events? Maybe you were thinking about a friend you’d lost track of and then saw them the next day? Or maybe your synchronicity experience came through a dream as mine did. For an article about Inanna’s descent, see Listening to the Dark: The Descent of Inanna. For another post about synchronicity, see A Message from the Moon: Synchronicity as Inner Guide.