After moving to our land in 1972, I often walked the trail heading south through my fields. My dog ran ahead and circled back the way retrievers do.  In five minutes, we entered the deep forest. 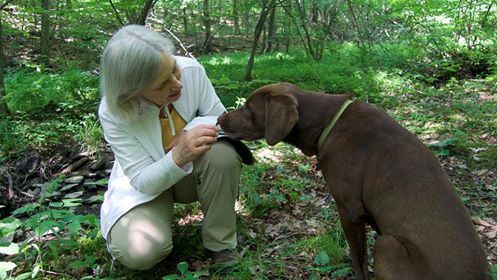 With Willow in the deep woods

I followed an old lumbering trail near the border of my property until I came to a stream. Then I turned east to walk uphill on a neighbor’s trail.

I headed toward “the government land” (now the Finger Lakes National Forest) and a hemlock gorge. At the top of the trail, I paused to lie on my back in a clearing surrounded by graceful trees with draping branches. I looked up and lay still until my breath quieted. The hemlock circle protected and calmed me. After my forest meditation, I walked downhill toward home. 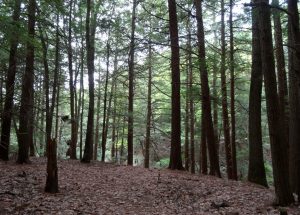 In the circle of hemlocks 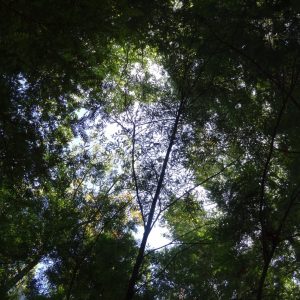 Lying on my back & looking up

In 1989, my husband Vic and I organized a weekend workshop led by Jungian analyst and Vic’s writing colleague, Marvin Spiegelman. Some participants had marriage troubles. Others worried over children. I struggled with anxiety and paralyzing self-criticism. With my inner judge on the attack, I felt defenseless and beaten. No wonder I was anxious. 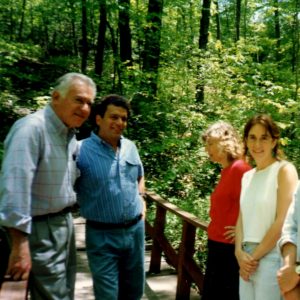 Marvin Spiegelman, Vic, me, and Marvin’s daughter on the hemlock trail, 1990

“You’re wasting your life. What have you accomplished? Don’t you have any worthwhile goals?” the inner critic said. Part of me knew it wasn’t true, but I couldn’t defend myself.

That weekend, I worked on this complex I’d struggled with since I was a kid. I don’t remember what techniques Marvin used, but I remember feeling hopeless and stuck.

“Pay attention to your dreams tonight,” he said. “See what shows up.”

That night I had this dream. I lie on my back in the hemlock grove and look up toward sky. The trees surround the clearing in a perfect circle. As I watch, they move, slowly, in a swaying dance. The branches become arms, waving their green over me, holding me, comforting me. My heart opens as Tree Goddesses surround me with Mother Love.

“You need to talk to those trees,” Marvin said when I reported the dream the next morning. “Do you know how to do Active Imagination?” 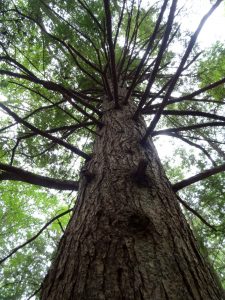 “Find a quiet place where you won’t be disturbed. Have a pen and a journal with you.” he said. “Give those trees a voice. Ask for their perspective and advice about your inner critic.  Speak back to them in a written dialogue, like writing a play.”

“Yes,” Marvin said. “Stay focused, but listen inwardly. Don’t force anything. Let the conversation take its own path, but begin by asking those trees to help you.”

“This is a good practice for you,” Marvin said. “If it feels like too much, back away, but otherwise keep talking to those trees.”

That night, I opened a new journal and wrote. 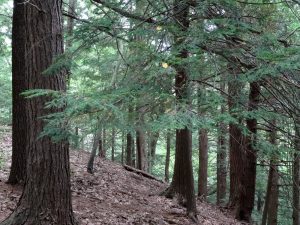 I paused and listened for what they might say.

I’m not an analyst and rarely recommend Active Imagination to others, but it’s my favorite tool for psychological understanding and exploration. Active imagination can be done with other creative forms such as painting, but I prefer writing in a notebook used only for this purpose. I talk to moods and the inner voices that hassle me, but I also interact with supportive images such as the trees or other dream images. If you’re easily overwhelmed, then this may not be for you. I recommend Jean Raffa’s article Active Imagination: A Tool for Self-Discovery. Wikipedia has a good article about origins and uses of Active Imagination. For another article about my use of Active Imagination, see I Thought I Could. In Grieving for a Sacred Grove, I write about the endangered hemlock grove.