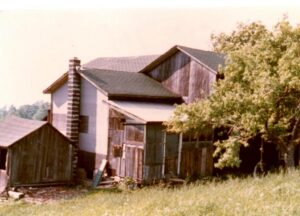 In July 1972, they moved with their baby boy to a crumbling farmhouse on a dirt road and immediately got to work. She cleared cobwebs in the cellar while he made shelves from old barn boards. Like her grandmother, she grew vegetables and picked summer fruit. She canned to feed the family in winter and arranged the jars on the shelves in a rainbow of color, red tomatoes next to blushing apricots, pale pear next to yellow beets. 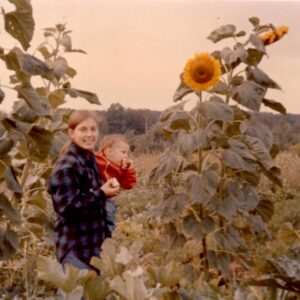 They demolished an old wood shed and a crumbling out building that once housed a wagon.  He helped her rototill and plant a garden, teaching her how to use both sides of the rake, one to pull away debris and one to smooth the soil.

He rebuilt a collapsing cellar wall while their second child watched from a safe distance while his daddy tore off the front porch, jacked up the house from underneath, and pulled out stones, rock by rock. Mixing mortar, he built a strong foundation with the old stones. 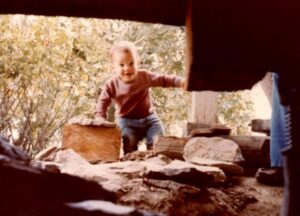 Snow seeped through a split in the roof when the wind blew from the south, so he replaced part of the roof, too. One project at a time for almost four decades while he taught full time 100 miles away and wrote three books. This farm was his childhood dream come true and worth the effort.

When the kids were older, the family pulled plaster from crumbling walls, trying to avoid the dust. She reluctantly learned to finish sheetrock, but preferred glazing old windows. 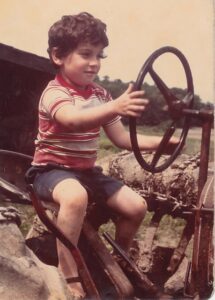 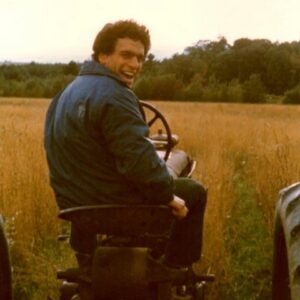 “It’s a two adult house for the wildly industrious,” she said before the kids were old enough to help him with firewood. She said it again when their sons left home to find their way in the world.

Once again, she went with him to the forest when he cut firewood. He wore chaps and a helmet while he used a sharp chainsaw to cut sick trees. She wore earplugs while she loaded cut logs in the wagon.

He threatened, with a laugh, to give all his tools away, but without kids at home, they could afford to hire helpers for big projects. They bought a new orange tractor, too. In 2006, after adding a sunset deck, new windows and siding, and painting the house forest green, they threw up their hands and said, “We’re done!” 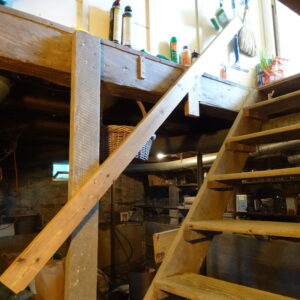 The following winter, his vitality disappeared, but he kept trying. During chemotherapy when he was too sick to write, he built a safe railing for the steep stairs to the cellar. 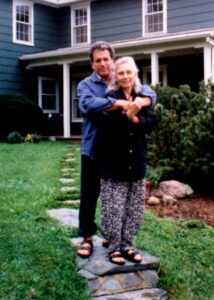 She couldn’t save him, but they’d saved the farm, so the two person house became a one person house with helpers for gardens, firewood, and mower.

When she descended to the cellar, she grabbed the smooth wooden railing, admired the stone foundation, and thanked him for support. The old canning jars and cellar shelves were once again covered with cobwebs

I’m still not ready to leave the old house, the forest, or the beautiful sunset. Have you made choices you never thought you’d make? There will be a time to go, but I’m still raising Monarchs and gardening and burning firewood. I’m still grateful for deep roots and helpers, including one of my sons who now lives just a few miles away.

For other posts about why I’m still in my country home, see For the Love of Trees. Or more to the point, see Lessons from Artemis, Goddess of the Wild.