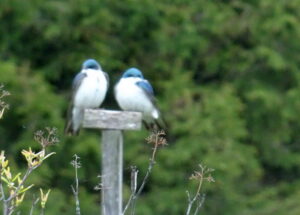 “Birds make great sky-circles of their freedom. How do they learn it? They fall and falling, they’re given wings.” ~ Rumi

After their first four eggs were stolen from the nesting box, the Tree Swallows returned. I felt forgiven as they cuddled and mated again. When she built a second nest, I laid feathers on the predator guard as an offering. She didn’t hold a grudge and used my feathers in her new nest. 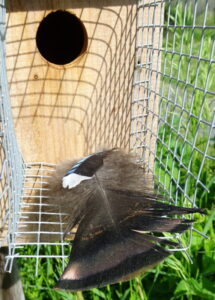 The couple relaxed around me. He stayed on his perch and watched as I walked by. I knocked on the outside of the box before lifting the side to make sure his mate was out, and when she didn’t fly, I assumed she wasn’t home. I was wrong. For weeks, she stayed on her nest incubating her eggs or keeping her nestlings warm when I peered in with my big curious face. She honored me by staying and looking in my eyes without fear. 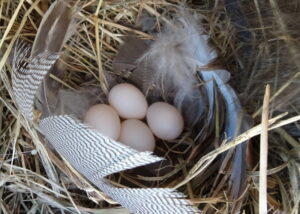 There were four new eggs and many feathers. including mine. Males also add feathers after the eggs are laid, so it was a group effort. The predator guard did its job and the eggs stayed safe. 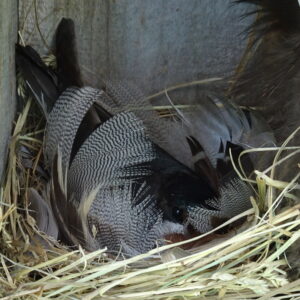 I watched them feed their brood and admired their flight in graceful soaring sky circles. A few nights ago, a little over two weeks after the eggs appeared in the nest, both parents circled the box for an hour. Calling, swooping, calling…. Little heads looked out the box door and then ducked back in. As the sky darkened and a lightning storm neared, each parent circled a few more times and dropped food inside the nesting box door. By 9 pm, they were gone. 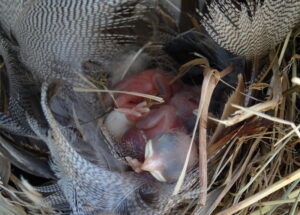 At dawn, the parents returned, circling, calling, swooping. Little ones stuck their heads out and looked around. In and out. Almost taking the leap before ducking back in. Heads in and out for four hours before the last fledgling flew at 10 am. The world is scary and they know it, but once launched, they flew like experts with their parents in huge gliding circles. I wept at the sweetness of this Swallow family, the gift of my front row seat, and a second chance. 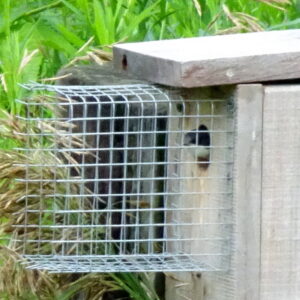 While I watched that morning, I argued with my impatient practical voice who wanted to weed the garden or read a book or do something “worthwhile,” but I’d known these little ones since they were eggs in a feathered nest. I was mesmerized by the patient persistence of the parents and those swooping circles, the quiet persuasion and the little heads going in and out. The parents gave me a needed lesson in patient Love. Circling and encouraging. Never giving up.

Do you have opportunities to watch nature closely? This is the closest I’ve bonded with wild birds. For the experience of having the first nest raided by a predator, see Nature’s Lessons: Forgive, Protect, and Try Again. For a post about a stellar  Bluebird season a few years ago, see When the Bluebirds Fledged.