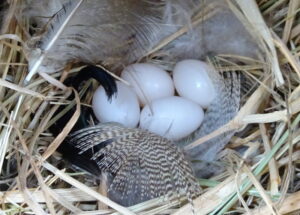 Every morning, I walk with my dogs before breakfast. Since one of my bird nesting boxes is near the trail head, I often checked in to see how the resident Tree Swallow family was doing. At last count, there were four eggs in a nest decorated with all sorts of feathers she’d collected. Each new egg was accompanied by new feathers. 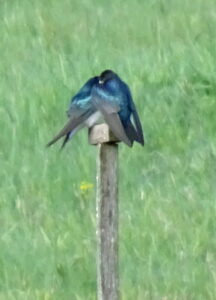 Sharing a perch before mating

That morning, I opened the side door and witnessed a catastrophe. No eggs. No feathers. Only the scrambled remnants of the nest. All four eggs were gone along with every beautiful feather.

The culprit was probably a raccoon doing what raccoons do to feed their family. Bird eggs? Delicious and perfect for the raccoon kids, but I loved each tiny oval promise. I loved the Tree Swallow Mama who added feathers she found—white, black, stripped, tan—with each new egg.

It hurt to see the destruction—and it hurt more knowing I could have prevented it. Why didn’t I put the predator guard on the front of the box as soon as there was one egg? Why? I inspected the box again and wept at the loss of life and promise. Then I cursed myself. “You’re an idiot, Elaine. This murder is your fault.” 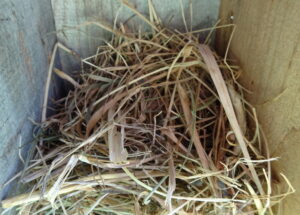 I’d removed the new predator guards from two nesting boxes close to my house earlier in the spring when the birds seemed wary of them. The Noel Predator Guards (wire tunnel entrances) were an experiment after many nests were raided last year. I’d read birds can be scared by the tunnel and it can be put on after an egg is laid because a bird won’t willingly abandon her eggs.

When the Bluebird female deposited two eggs in her nest down the fence, I screwed the predator guard in place. I watched through a telescope as the Papa Bluebird went through the tunnel first and his mate followed him. A few days later, I checked and there were four healthy Bluebird eggs. 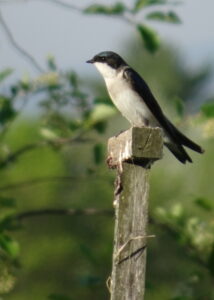 The Tree Swallow started her nest later. Why didn’t I put the guard on as soon as there was an egg? I can’t tell you. I can’t explain it to myself. Yes, they were close to the house, but  hungry critters prowl around at night and last year many nestlings were killed. I’d already seen the guards work, but I got distracted and didn’t finish the job. The Chickadees, Wrens, and another box of Bluebirds in the field figured it out when the guards were left on. They didn’t need my interference.

The Swallow male sat on his perch for a few more days. The female stood on top of the predator guard I’d carefully screwed in place after the eggs had disappeared. Did she look bewildered or was I projecting? Was she grieving? I didn’t know, but I was. Soon they disappeared. Maybe they found a place to start a new family. 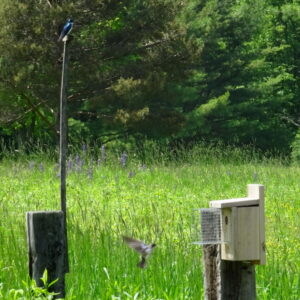 I cleaned out the battered nest hoping the Bluebirds would use the box for a second brood, but a few days later, I looked out through my telescope and the Tree Swallows were back. She went in and out of the house (through the predator guard) building a new nest. Her mate sat on the perch guarding while she swooped inside carrying nesting materials.

I learned a lesson about attachment, mindfulness, and the value of predator guards, but I hated learning at the cost of precious lives. I’m sorry I didn’t protect your family, Mama Swallow, and I’m grateful for your persistence. I’m so glad you’re back. 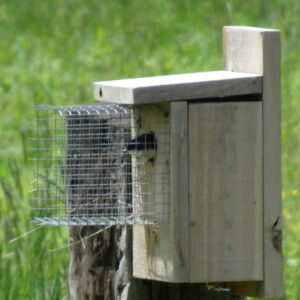 The female Swallow carried grasses into the box all morning, occasionally pausing inside the box. I didn’t disturb her, but couldn’t stop watching through my binoculars and rejoicing. I’m waiting for Swallow eggs, but all four Bluebirds hatched. Are there other maniacs out there watching birds build nests or Monarch caterpillars chew milkweed leaves instead of writing or sorting through piles? Or is this watching exactly what I “ought” to do? It’s clear what my priorities are as I scan the gardens and fields for butterflies and birds.

For a post about bluebirds, see When the Bluebirds Fledged. For another post about providing housing for birds, see The Problem with Preferences.