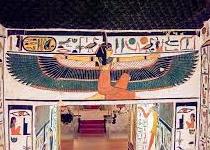 In ancient Egyptian art, Ma’at (pronounced Muh-aht) may appear as a small kneeling figure or a large goddess with outspread or embracing wings. Her defining feature is a feathered headdress–just one upright feather. She’s first mentioned  in the Pyramid Texts of Unas (ca. 2375 – 2345 BCE).

Our women’s mythology class studied Egyptian Goddesses for a few years before moving to other material. We recently returned to The Myth of the Goddess by Anne Baring and Jules Cashford for a second dip into ancient Egyptian tradition, symbolism, and art. This time, Ma’at captured my attention. 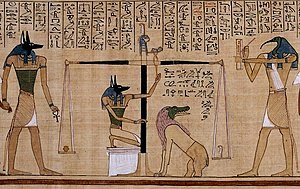 Weighing of heart (Ma’at sitting on top of scale) 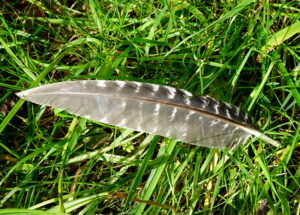 For me, Ma’at symbolizes a balanced social order focused on the heart. Egyptian civilization was theoretically built on her principles of justice, truth, and balance. Her image was common in tomb paintings and in The Egyptian Book of the Dead. Sometimes the Pharaoh held a doll sized statue of Ma’at in one hand as a symbol of her influence. Judges wore her emblem on their clothing. 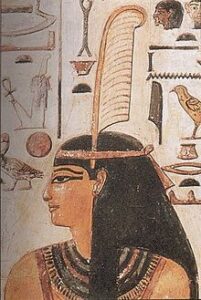 In Egyptian theology, the social order reflected the divine order, so Ma’at’s principles permeated all of  life. I don’t know how well this worked in practice in ancient Egypt, but I love the symbolic significance in my own life. Each time I find a feather or receive a feather as a gift, I think of what I need to do to keep my heart light through kindness, generosity, care of the Earth and living beings, forgiveness, and gratitude. 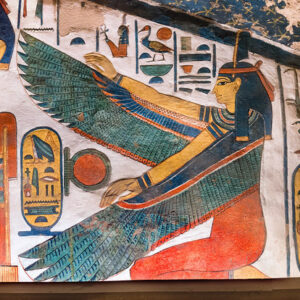 I grieve over the injustices of our world and the unrelenting wounds inflicted on the Earth. I hope we’ll find new balance based on fairness and goodness, but did humans ever live with Balance and Justice? Maybe I’m naive, but the image of Ma’at with protective folded wings gives me hope.

As I pray for renewed trust and balance in the world, I also try to accept things as they are. I ask myself these questions, and I’d love to know your responses. What symbols support us? Where can we find a sense of balance and fairness? How can we establish truth and harmony in our culture and in ourselves?